Arctas is financially backing a team of seasoned wind developers, and co-developing with them the 600MW Mariah Wind Energy Center in Parmer County, Texas.

The group acquired the early stage development project from a Scandinavian developer, and continued with the advanced stages of development.

Parmer County is located in the northern Texas Panhandle region, one of the top performing wind areas in Texas. 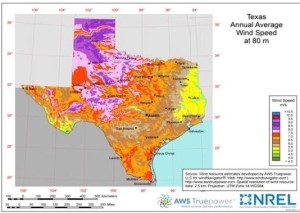 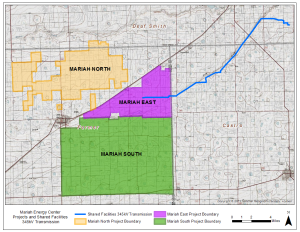 The wind complex is being developed as three separate consecutive projects, all on adjacent parcels of land as shown above and using a common transmission line:  Mariah North (230.4 MW), Mariah East (139.2 MW) and Mariah South (230.4 MW).  Net capacity factors for each are in teh 47-48% range.

The $350 million North project is currently under construction and scheduled for completion by the end of 2016.  Funding for the project is from a combination of equity, tax equity investors and innovative REIT financing.

The project will use GE 2.4MW wind turbine generators and GE will provide O&M services. 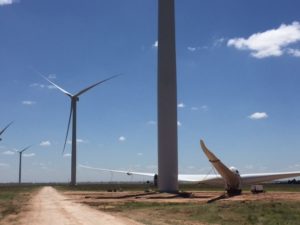 Photo of GE wind turbines being erected at Mariah North.

Mariah East is in advanced stages of development.  We expect it will be financially closed and a full notice to proceed given for construction by August 2016, and to achieve commercial operation by the summer of 2017.

The partners have secured all relevant land options and are working on the mid-stage development of Mariah South.

The parties recently bid into the Austin Energy RFP, but were not the lowest bidder.  We will continue to explore solar opportunities at or near the Mariah site, which has very favorable solar as well as wind characteristics.

Mariah North is funding and constructing an approximately 21 mile, 345 kV generation tie line, which it will ultimately share with Mariah East and Mariah South under an existing Shared Facilities Agreement. The new line will interconnect to ERCOT’s Windmill substation near Hereford, Texas, and provide energy to the ERCOT North Hub.  The three Mariah projects have each been allocated a portion of the 600 MW injection capacity equal to the name plate capacity of the respective project at the Windmill substation. The substation is a part of the ERCOT Competitive Renewable Energy Zone (CREZ) system that was energized in late 2013, stimulating further development of renewable energy in this wind resource rich part of Texas. 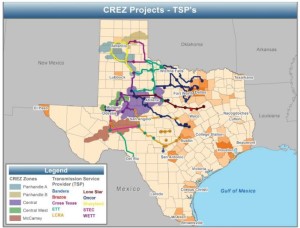 Texas’ ERCOT power market is one of the largest energy markets in the United States, with peak demand in 2015 of over 69,000 MW and installed capacity of 80,000MW. Texas is also the US leader for wind power, with expected installed wind capacity to be around 21,000MW by end of 2016. Demand for electricity has grown in the past five years, and is expected to continue to grow. Wind energy at some times provides close to 50% of the grid’s total demand.  Future electric demand growth is expected to come from oil and gas exploration activity, newly constructed LNG export facilities, newly expanded petrochemical plants along the Texas Gulf Coast, the addition in 2019 of the City of Lubbock, and the creation of new data centers among other factors.